The Lavender and Heysen Trails 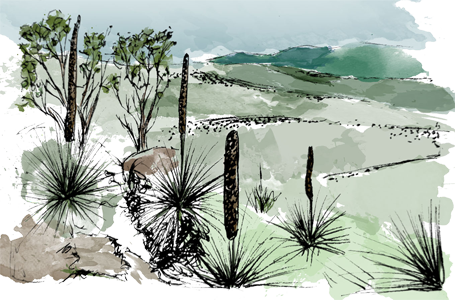 The Lavender Federation Trail (LFT) preserves the memory of Terry Lavender, OAM, a South Australian who was dedicated to recreation in SA, and his vision for the LFT. This trail is a 325km linear hiking track that runs from Murray Bridge to Clare. If you would like to experience a small section of this trail within the Barossa, both '#2 Moculta Loop Trail' and '#16 Eden Valley Loop Trail' both feature a glimpse of the LFT. If you would like the challenge of experiencing the whole Lavender Federation Trail, then head to their website here.

This trail has been completely designed, constructed and is maintained entirely by volunteers. It is best to purchase maps for the trail as it will enhance your experience tremendously. They are available at various locations listed on the website and this money will go back to those helping preserve this beautiful trail.

The Heysen Trail is a 1200km Trail which extends from Cape Jervis in the South of the state and heads north to Parachilna Gorge, in the Flinders Ranges. Named after German born Sir Hans Heysen (well-know Australian artist), parts of this trail feature in many bushwalks of the Barossa, and it bypasses some of the most scenic parts of the state. The first section of the Heysen was opened in the Mount Lofty Ranges in 1976 and Terry Lavender (who the LFT is named after) was instrumental in progressively opening further sections of the trail.

The trail was completed in 1993 and is recognised internationally as one of the world's great long-distance walks. Head to their website here for more information and details of where to buy the map guidebooks for the trail.